Note: The Famicom Files has now moved to it's new home at The Game Kun
http://thegamekun.com

Hi Friends! Thanks again for all your patronage to the Famicom Files. This was mostly a great experiment to see if blogging about video games would hold my interest. The short answer, is yes.

So in order to take things to the next level, I've migrated all of my posts to my new blog: http://thegamekun.com. You will find there a lot more frequent updates related to retro video games, tips on how to collect and buy old games, reviews and insights into import games for Famicom, PC Engine and more.

So be sure to visit the Game Kun and say hi! 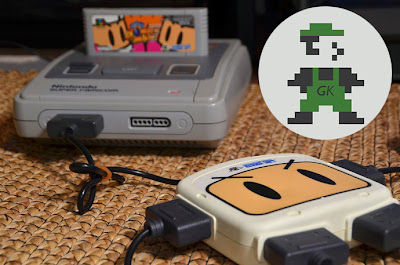 How To Store Loose Famicom Carts

Loose Famicom games; unless you have Japanese cousins or are loaded like Donald Trump, chances are your Famicom games are going to be sans box. Considering the matchbox size of Japanese homes, those cardboard behemoths known as boxes enter the garbage with the same frequency as rice ball wrappers.

So with so many cute and colourful cartons exposed to the elements, how can you keep them safe? Small, susceptible to sun fade, and lacking any spine labels, your famicom carts have an undying need for a home that simply cannot be satisfied. What's an unemployed collector to do?

During a recent trip to the Salvation Army, the solution made itself apparent in front of my eyes like the Statue of Liberty to Charlton Heston; the Kensonic Cassette Cabinet.

Did you know that Famicom carts are approximately the same size as a standard audio cassette with case? This means that any old cassette storage solution will hold your loose carts in 80s-kitsch style and comfort, safe from the elements and attractively displayed for your perusal.

So it may not be readily available, but it's out there. The audio cassette drawer is the Famicom-Gods' way of saying "we haven't forgot about you".

Dust bunnies, maggots, missing buttons and more. Yes, after thirty-ish years a Famicom can gather a lot of dust and much more. But yesterday I got a Sharp Twin Turbo that blew my mind.

When ordering off Yahoo Auctions (those of you who have the pleasure of doing so), it is always a crapshoot when ordering the items listed as "Junk". While obviously not "junk", an item labeled as this simply means that what you see is what you get. Sometimes it has missing parts, sometimes it's fully broken, or sometimes the seller simply doesn't know the item well and wants to cover their ass. Either way, a "junk" item will always sell at a fraction of the price of a confirmed working item. Risk and reward.

Anyhow, my "junk" Sharp Twin Turbo finally came. It looked alright in the picture and I have enough experience with them under my belt to deal with most issues. But when I opened up the box and unwrapped the plastic bag covering it, it was not my eyes that were surprised, but my nose. This thing had been pissed on.

Not an overwhelming amount of piss, but piss nonetheless. My imagination leads me to believe that the introduction of a new puppy to some poor bastard's tiny Japanese household began a series of events that lead to this poor twin turbo being turned into a urinal. Instead of dealing with the mess, Famicom-san (at the urging of his wife, who hated the old thing anyways) simply posted it on Yahoo and cut his losses.

A nice hot bubble bath got it as good as new, but what a stank surprise.

I know it's only three little plugs to change (two actually, my TV is mono), but think about the time and effort required every time I want to go from Famicom to Neo Geo to Super Famicom... and back! Immeasurable.

So for about $10 I got a 4-way A/V switcher. I have everything plugged in at once, labelled beautifully, and ready to play. No fuss, no muss, just nice clean organized cordage. 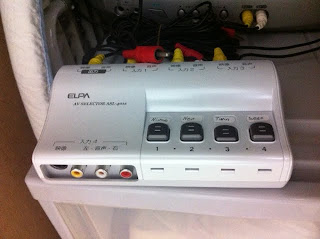 No longer will laziness get in the way of me enjoying any game on any system. Well maybe. My beer isn't refilling itself.
Posted by Mike Rogers at 10:10 PM No comments:

Looking to buy a Sharp Twin Famicom, Super Famicom, or some Sega Saturn games? I've started a thread on Famicom World that I will be updating regularly. Check it out here!

Let's face it, I'm a fan of the old. Forget your PS3s and XBOX360s, I like my games old school. And that means controllers to. That's why I love this thing.

I was rummaging around a junk bin at a recycle shop this week when I saw the familiar glint of gold on red. The unmistakable image of a classic Famicom controller. What was it, a Hudson turbo controller? I traced the cord all they down to the business end and was equally surprised and confused when I saw what sort of connection we were talking; USB.

That's right, it is a PC gamepad styled after the beloved Famicom controller! It turns out these were produced in 2007 by Buffalo, who actually received license for the design from Nintendo. They even produced a Super Famicom version as well. They sold for about $35 new, but I'm happy to say that I paid much less.

Anyhow, after a few hours of dicking around with some software (these were designed for use with PC only - not us Mac users) I finally got the thing to work. The secret was some free software called Controllermate. I have it set up now to work on my NES emulator as well as PCSX, to allow me to play Playstation disks on my laptop.

The Verdict:
I don't use gamepads that much, but this thing does the trick. It feels solid and the buttons have the right amount of give to provide accurate feedback. The controller itself is responsive, and the turbo option definitely helps in some games. It even has L and R shoulder buttons, so almost any system is fair game. Oh, and the cord is generously longer than the original Famicom pad (but that's not saying much…). Overall it's a familiar feel and a nice touch if you feel the need to play some games on your computer.

Next time I'm going travelling, I can throw this bad boy in my laptop case and get my share of retro gaming anywhere I might be.

Have you seen anything like this before? Do you use gamepads for anything? What do you think of the 4 button interface meets classic design?

I've finished a mini-collection of my Famicom collection, I call it the Tris' Trio. I've always had a love for puzzle games, from Dr. Mario to Picross. But Tetris is just the quintessential puzzle game. I mean, who didn't own at least one copy of this game for the NES, Game Boy, or LCD keychain (if you catch my drift. This game was everywhere!).

Tetris, Tetris 2 + Bombliss, and Hatris - three quality puzzle games from Bullet Proof Software, and all complete in box. Kind of makes you want to cry a silent tear of joy.

Basic Rundown:
Tetris: Textbook Tetris. Downside? Down on the d-pad rotates the piece instead of dropping it. Who came up with that? Many a four-row move has been lost as a result of this asinine control scheme.

Hatris: Tetris, but less fun and with hats instead of tetriminos.

Tetris 2 + Bombliss: Finally, two player Tetris! Not to mention, they fixed the ridiculous control scheme present on the first Famicom version. Oh, plus another game that's alright, I guess.

What do you think; is Tetris boring or awesome? What's your favourite puzzle game?

Posted by Mike Rogers at 3:07 AM No comments:

Just a dude that likes retro videogames. It might not be all Famicom related, but it oughtta make you chuckle.